What do you say about two dudes that decide to take on a project with a debut date only 2.5 months away? Are they idiots? Really big idiots? Really good at what they do? Or are they just a little over ambitious? (Or fucking retarded.) Now what do you call them when they take on 2?

Well, these two idiots, Dylan and Ricky, both decided to start projects in February, with goals of having both together and drivable for SoWo 2013. One being a ’72 Squareback that needs a fair share of rust work, and the other being a Volksrod (if you don’t know what that is, you’re about to find out). Ricky gets to do most of the hard work on both the cars, seeing as how that’s his day job, and Dylan doesn’t know how to weld… Pretty fucking ambitious, wouldn’t you say?

Let’s dispense with the pleasantries and get down to the business end of this shit-tastic shit storm of rusty metal, sheet metal, cut-off wheels, welding wire, and… well… more rusty metal.. 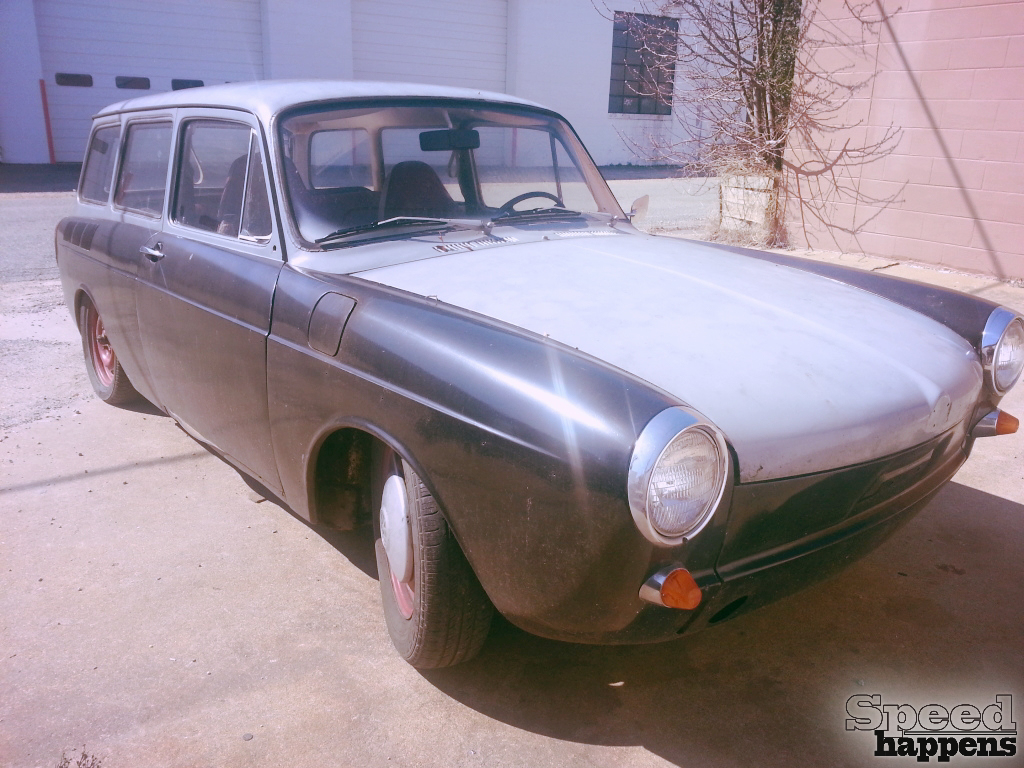 Dylan’s ’72 Squareback is quite the little sexpot, she’s been around a few blocks, and its been rough on the poor girl, to say the least. She’s been the victim of abuse, some real “ridden hard and put up wet” kind of stuff. To make the poor, beat up, old lady even harsher on the eyes, there’s been some real shaky cosmetic work at some point in her 41 years on the road. By who? Who even knows at this point. (As a side note, even Ricky owned her for a short time. Eskimo brothers? What!?!) 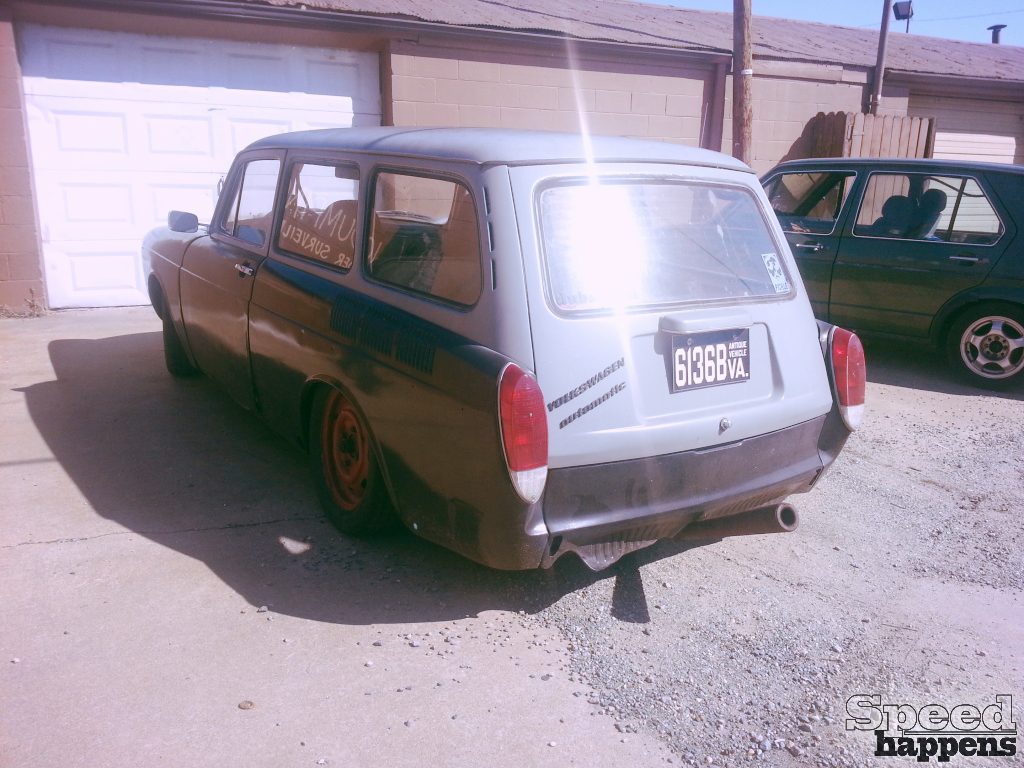 The girl is getting her inner fenders mostly cut out and replaced with clean sheet metal the RIGHT way, with a welder, for once. None of that shower caulked and sheet metal screwed in air duct flashing bullshit that was in there before (those fucking hacks)! There are some (read as “many”) holes in the floor pan that are getting attention as well, and the gas tank needs some love, and the bulk head, and the beam, and most of the suspension… She’s old! Cut her some slack. She’ll also see some reupholstered seats, cleaned up interior and exterior trim bits, and some new paint. We’ll see how much of that we can squeeze in before SoWo. 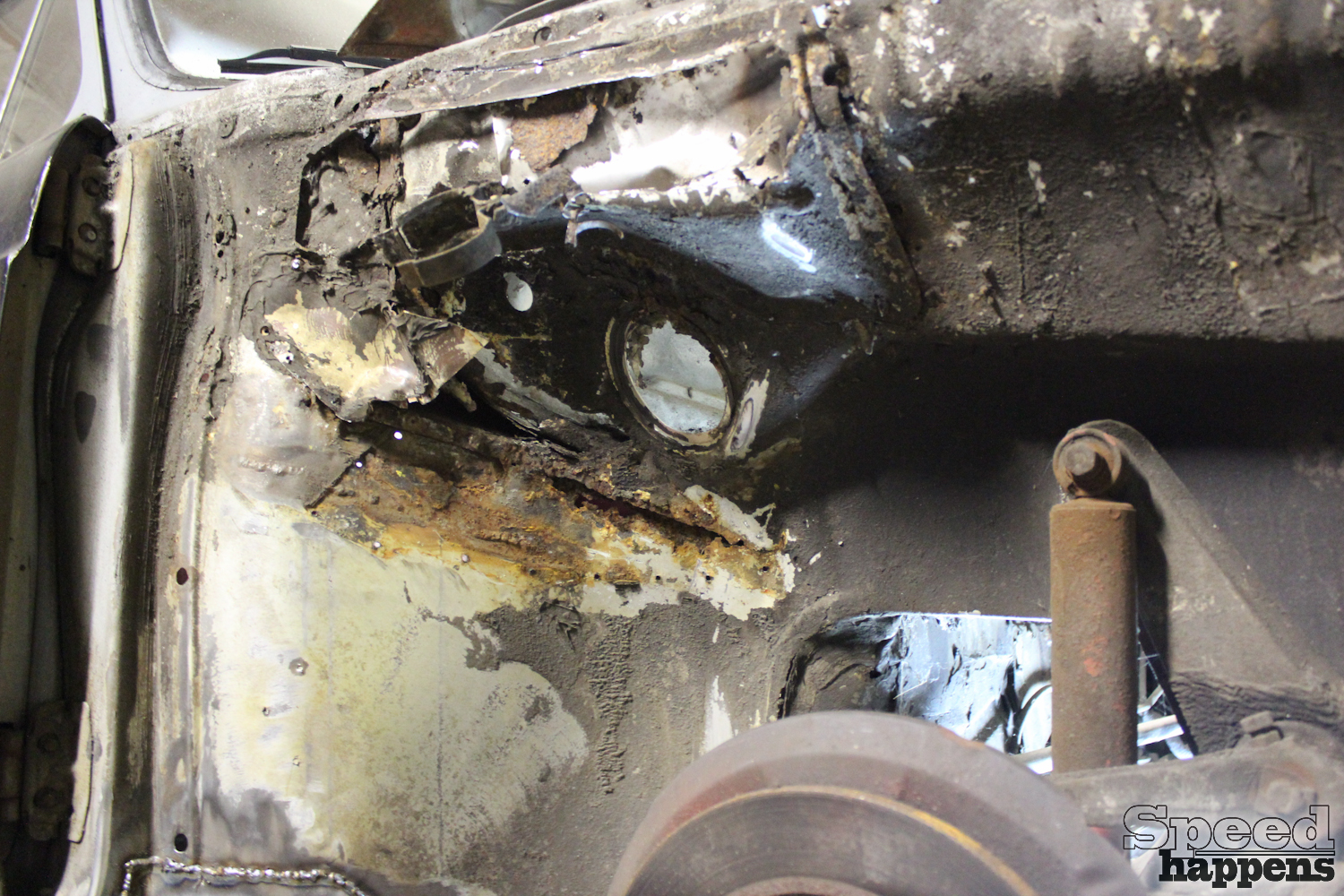 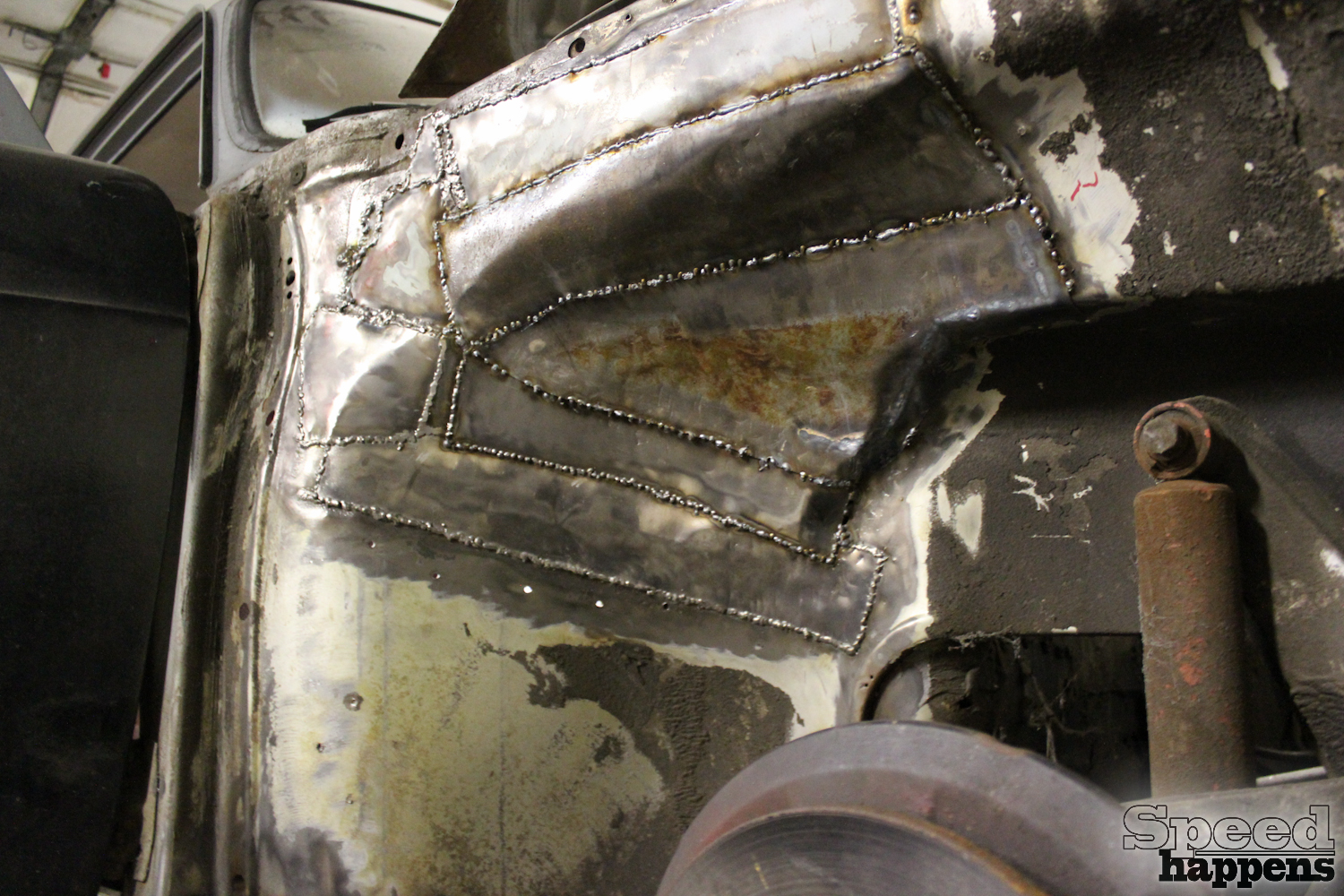 Now on to the next one…

Ricky’s Volksrod started life off as a’70 Beetle, and the top half is still mostly from the same beetle, although the original sunroof section is now gone and replaced with a rag top from an early model. The chassis is mostly from a ’66 Beetle, well, the front beam mount is off the ’70 and the trans mount/rear suspension is also off the ’70, so I guess the floor pans and original tunnel are from the ’66, at this point, it all kind of blurs together. 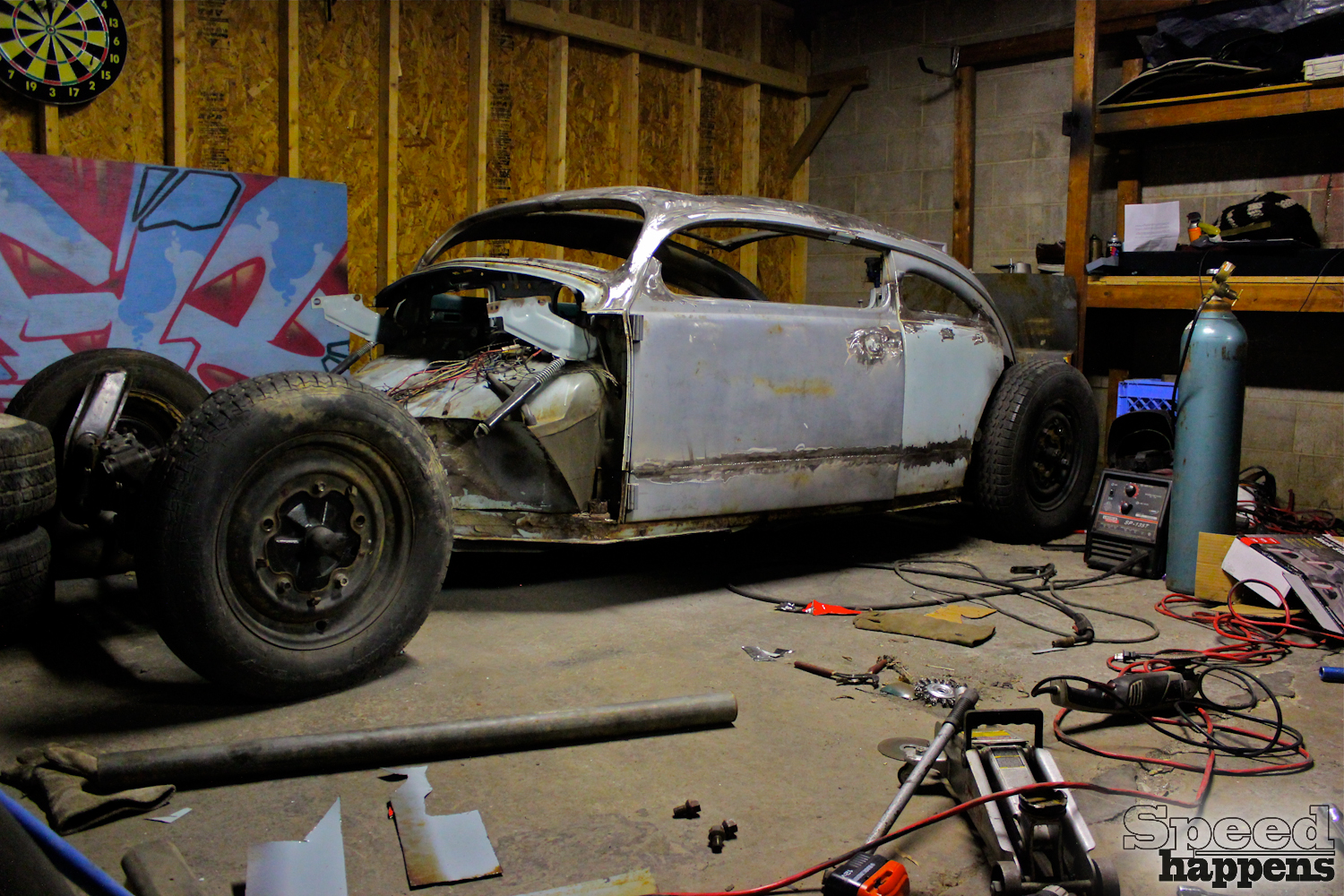 Side note: Lets define “Volksrod” real quick. At it’s most basic, it is a beetle with no fenders thats lowered and has a kind of “hot rod” looking appearance. And at its most basic, its really not all that amazing, just a fucking beetle with no fenders, woopty-fucking-dee-da-doo. Now a REAL Volksrod is going to have some sort of roof chop and/or body section and will usually have a front end extension and really incorporate a good deal of hot rod/custom facets, often involving lots of fabrication and what experts would refer to as a “fuck ton” of welding. 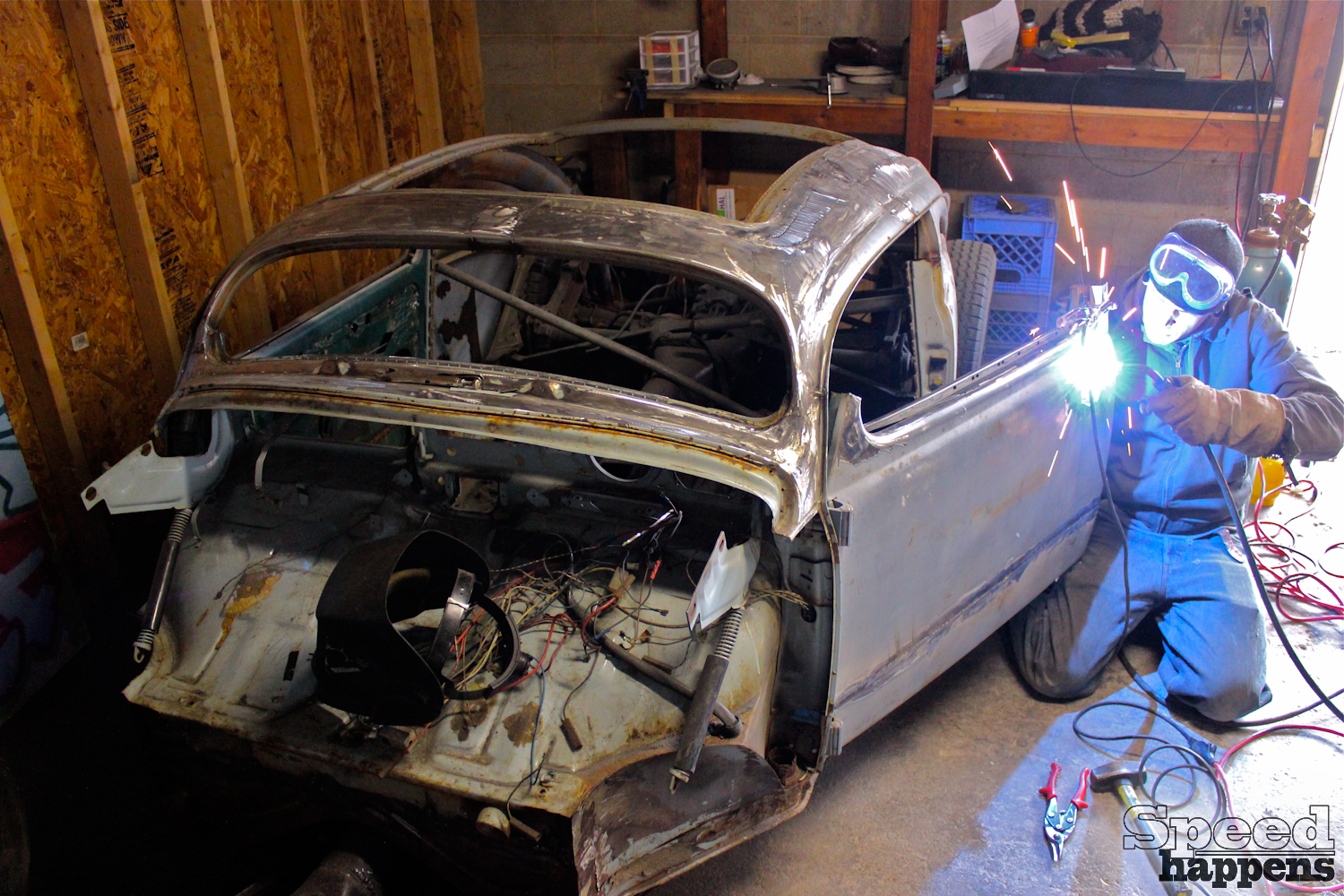 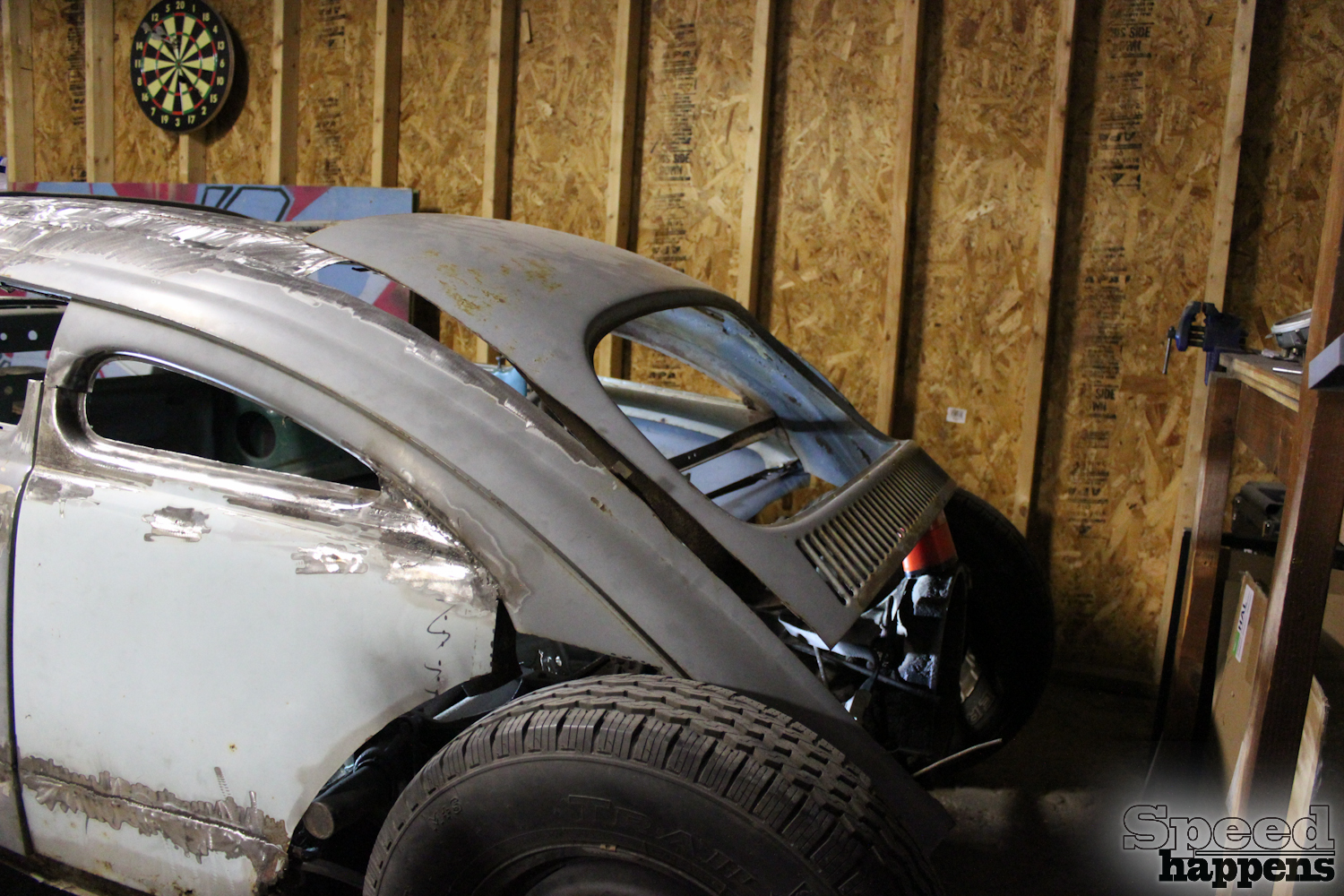 Ricky started his project a couple of years ago, swapping bulk heads on the chassis and doing the 7.5″ rear end/tunnel raise (essentially creating a 7.5″ body drop in the rear), repairing some holes in the floor pans, pretty much finishing the modifications to the chassis, and starting the chop and section of the body. The roof is chopped 9.5″ and the body is sectioned 4″ (that makes it 13.5″ shorter than a normal beetle, for those of you who aren’t so good at math). The roof section from the ’70 was cut out and replaced with a rag top section from a rusted out bug that ultimately found its way to the crusher (aawwww, sad face). The chop and section was tacked together, and then it sat, for two years, under a tarp, sitting, collecting dust, and random crap that was laid on top of it…

BUT NOW THAT MOTHER FUCKER IS BACK! And its [hopefully] going to be at SoWo 2013, along with Dylan’s Squareback! 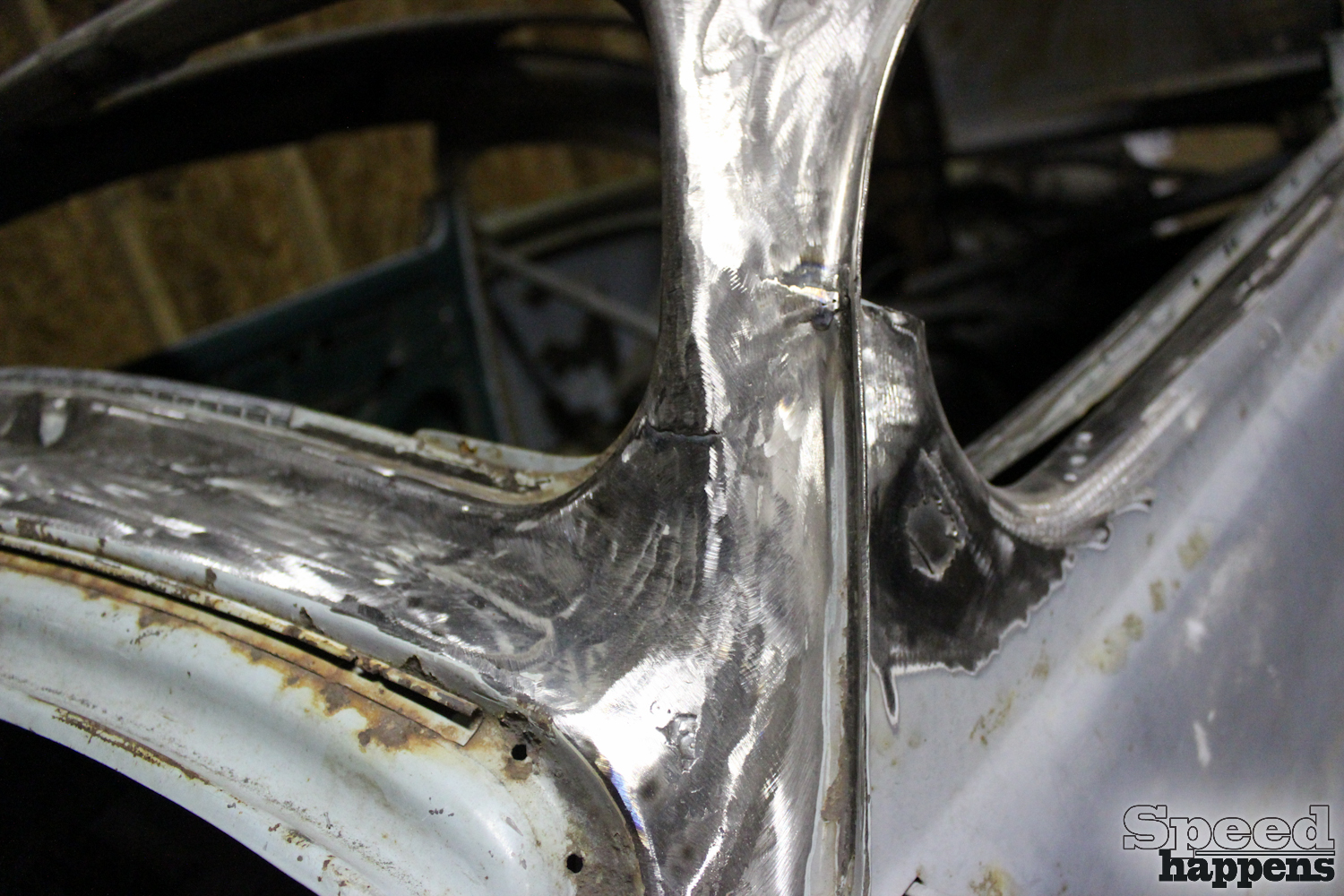 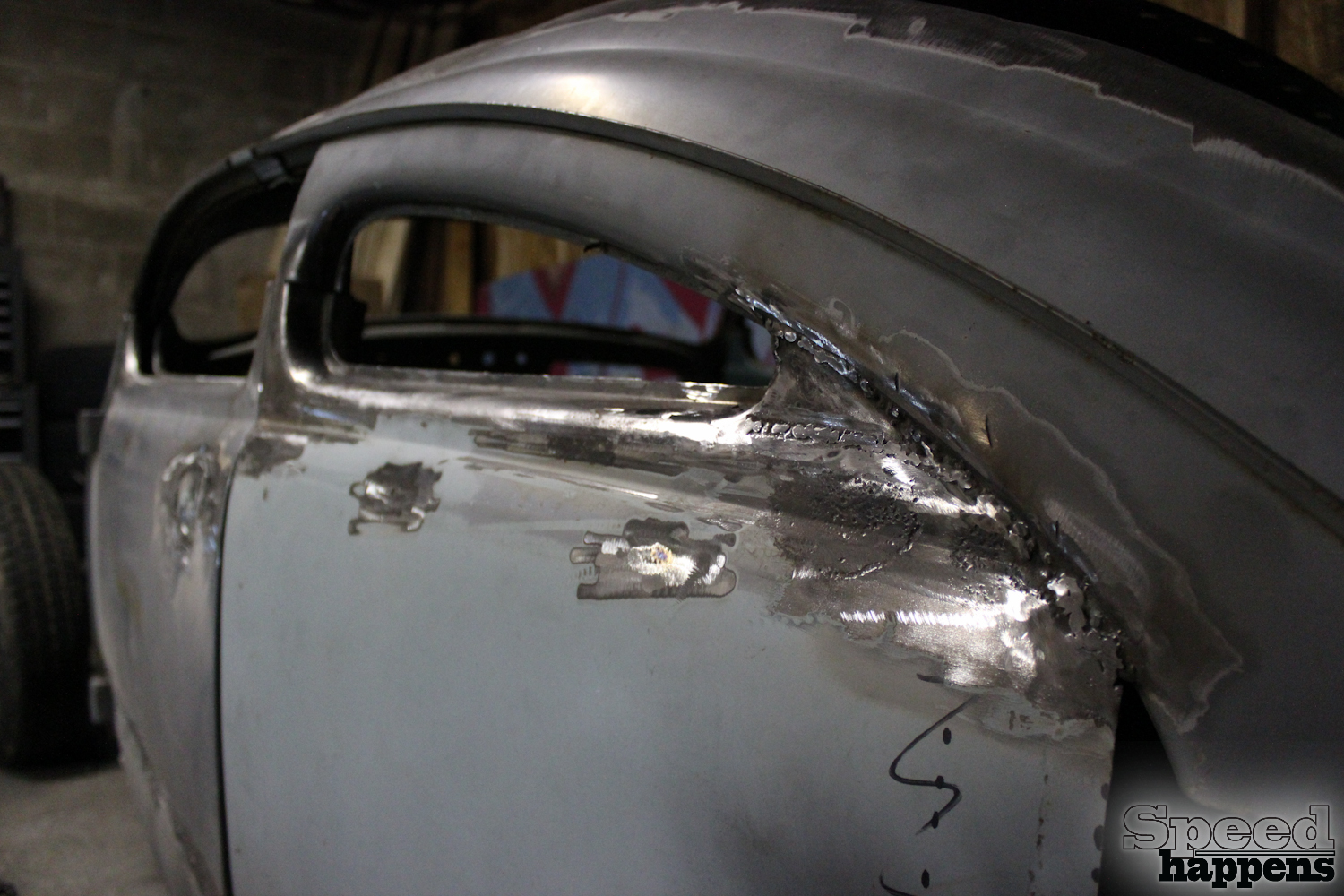 However, the build sheet for this ol’ girl looks a little more extensive than that for the whore of a Squareback: Finish the chop and section, finish the rag top section install, weld in the rear window section, build body supports and package tray area, build door window arches and fill the window gaps, smooth door handles and wiper holes, set the ride height on the suspension, build seats, find a motor, make windows, get tires, do burn-outs, get bitches…. and probably a few more things that I forgot… like paint, and electricals, and lights, and…fuck…

So stick around, there’s going to be more popping up on these two pretty soon. 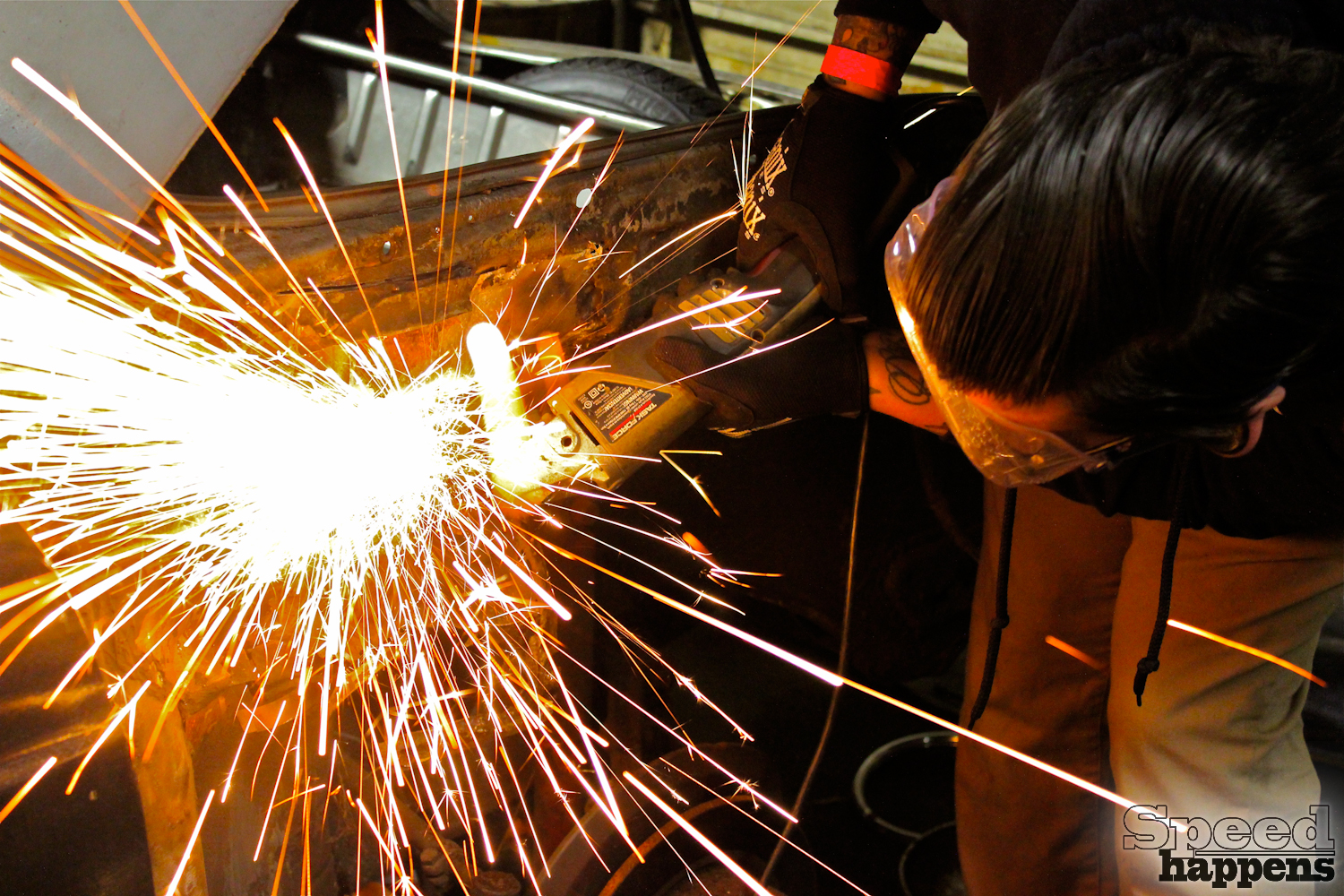